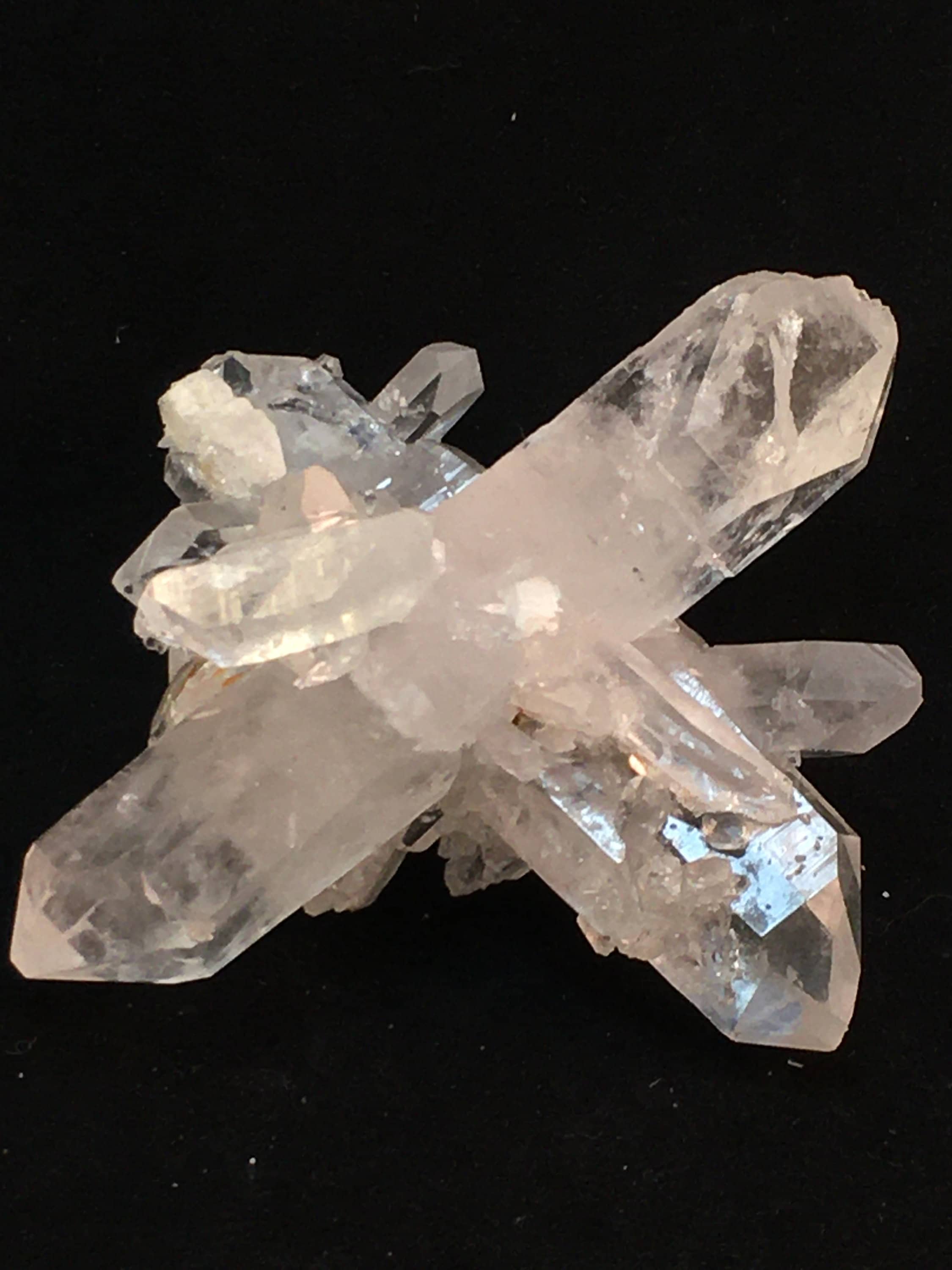 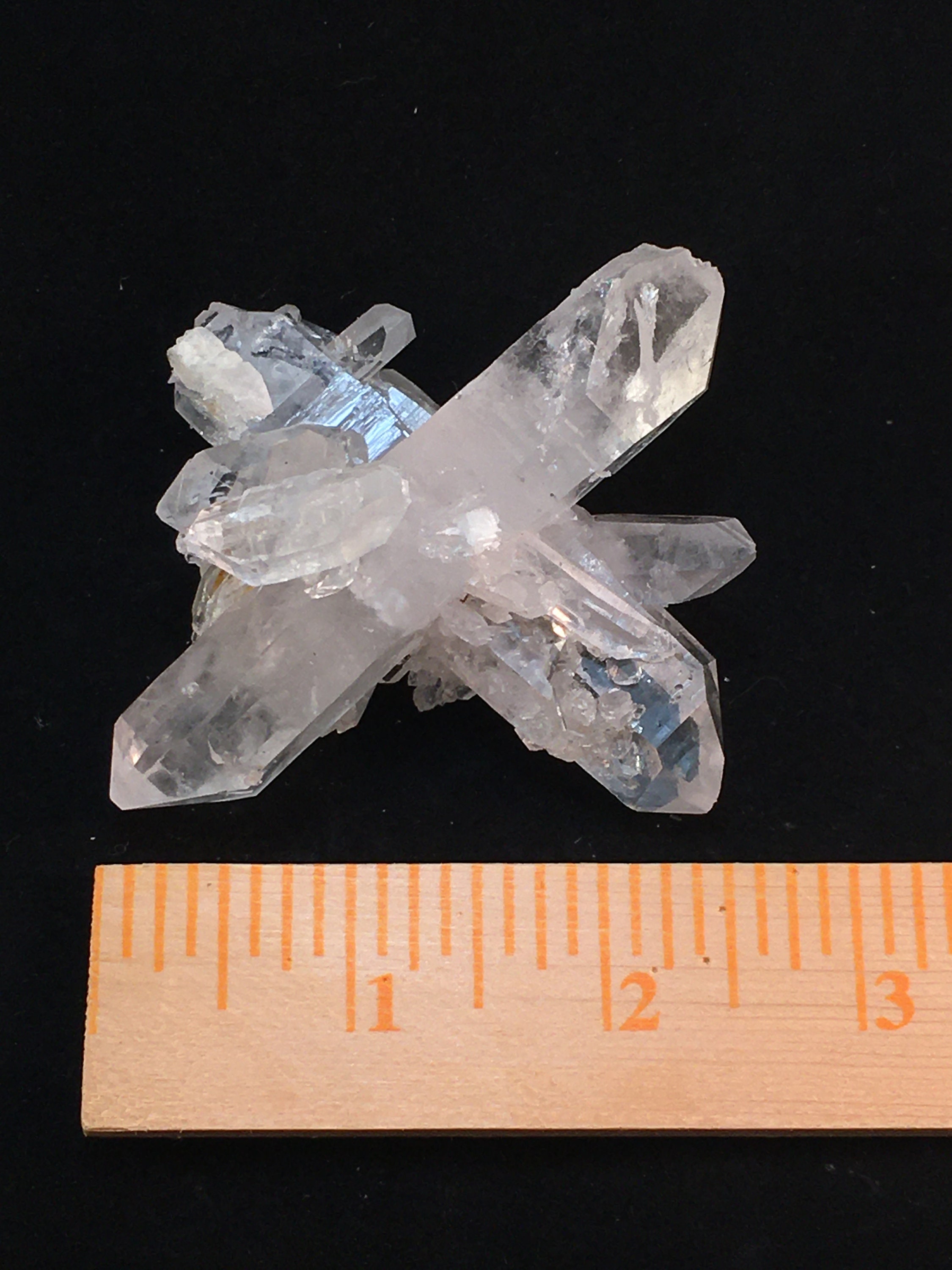 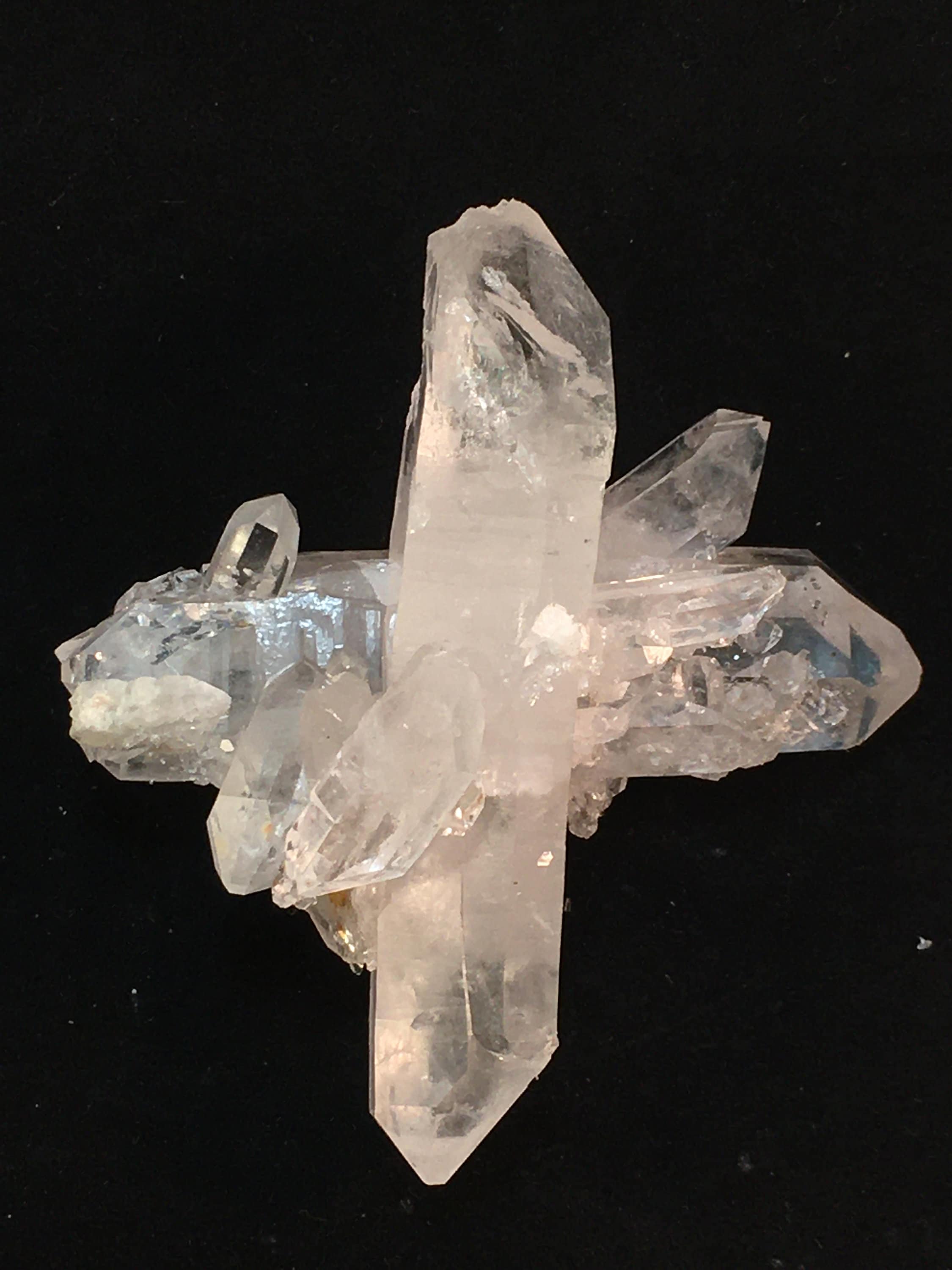 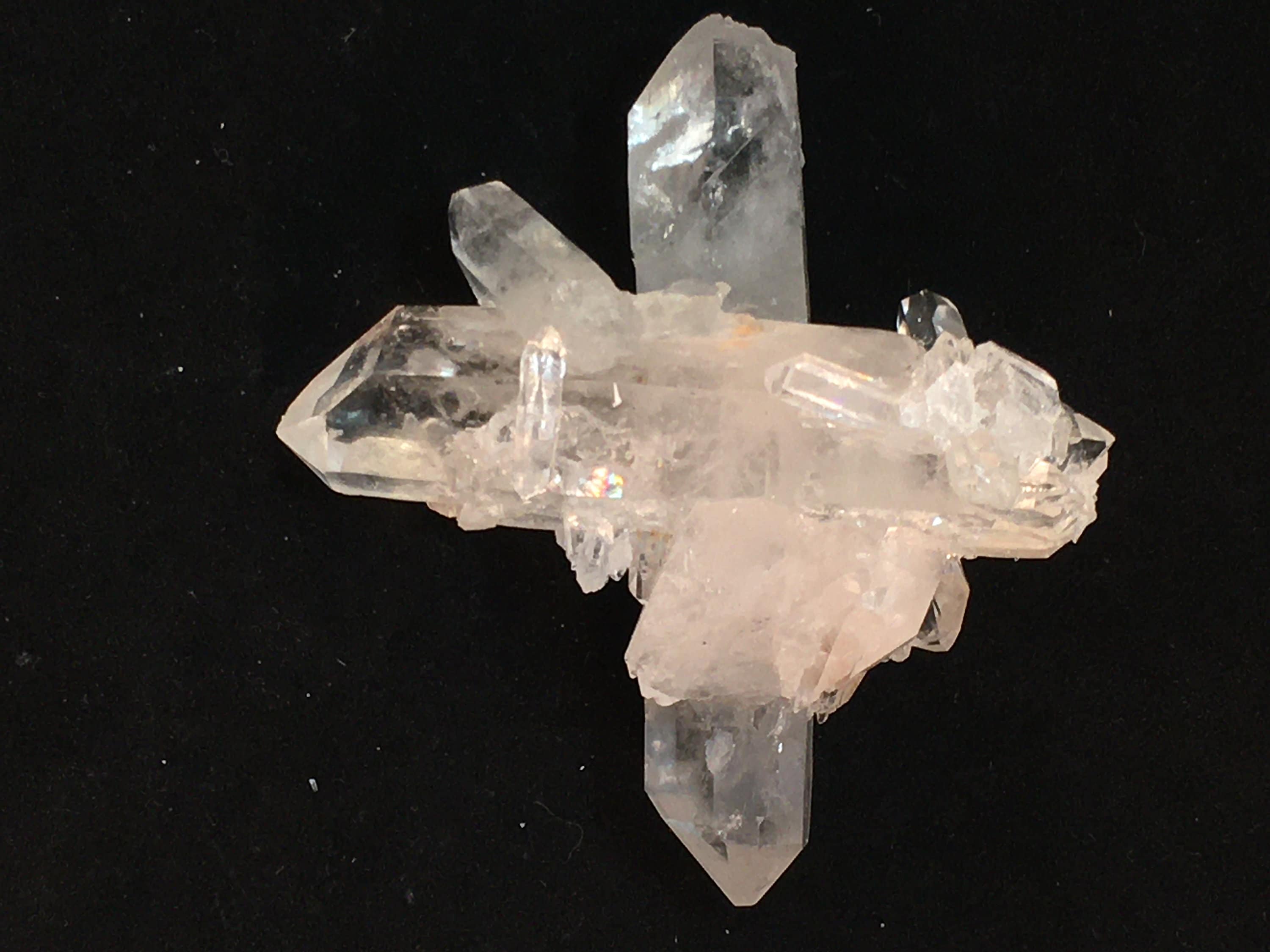 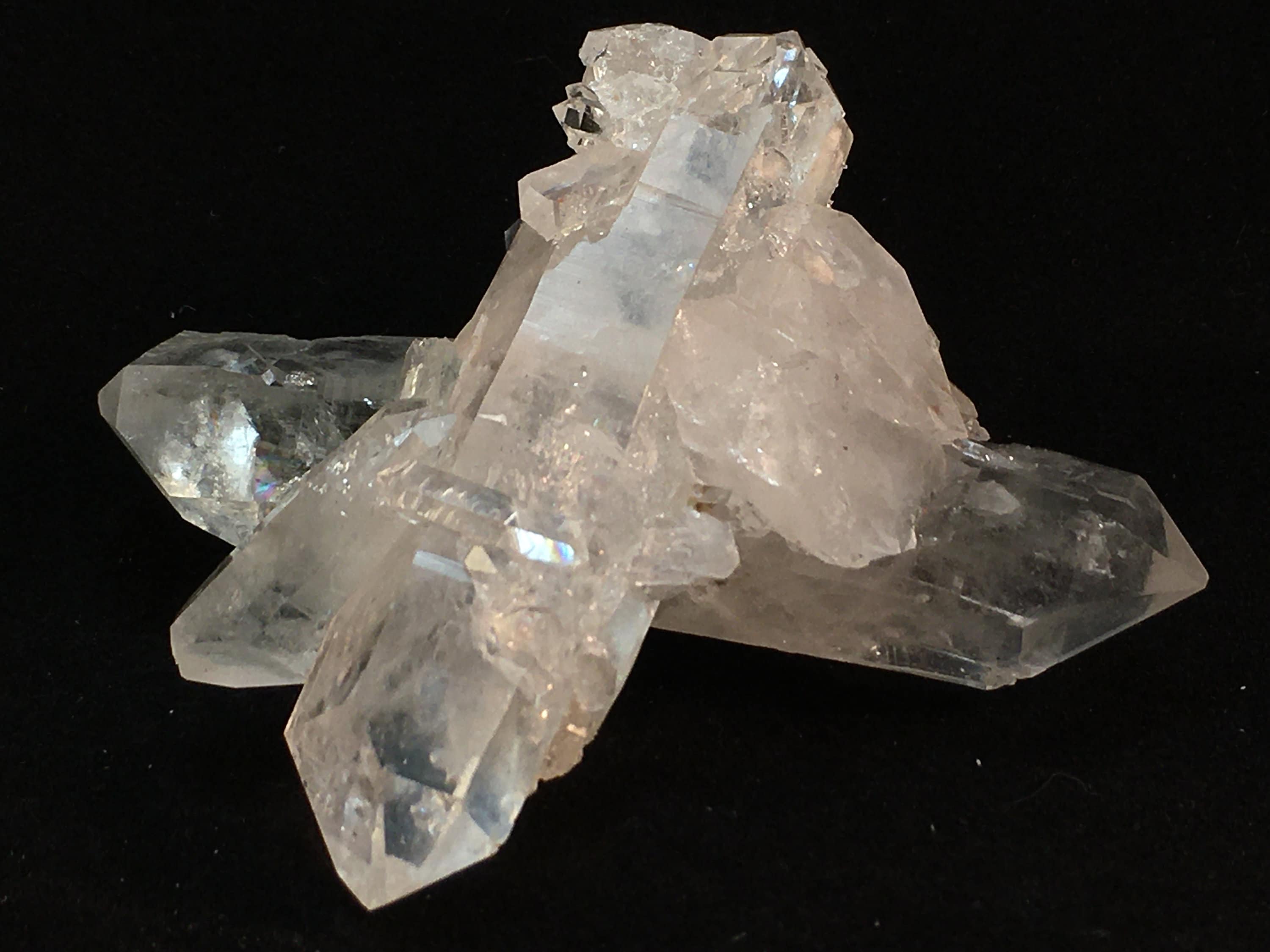 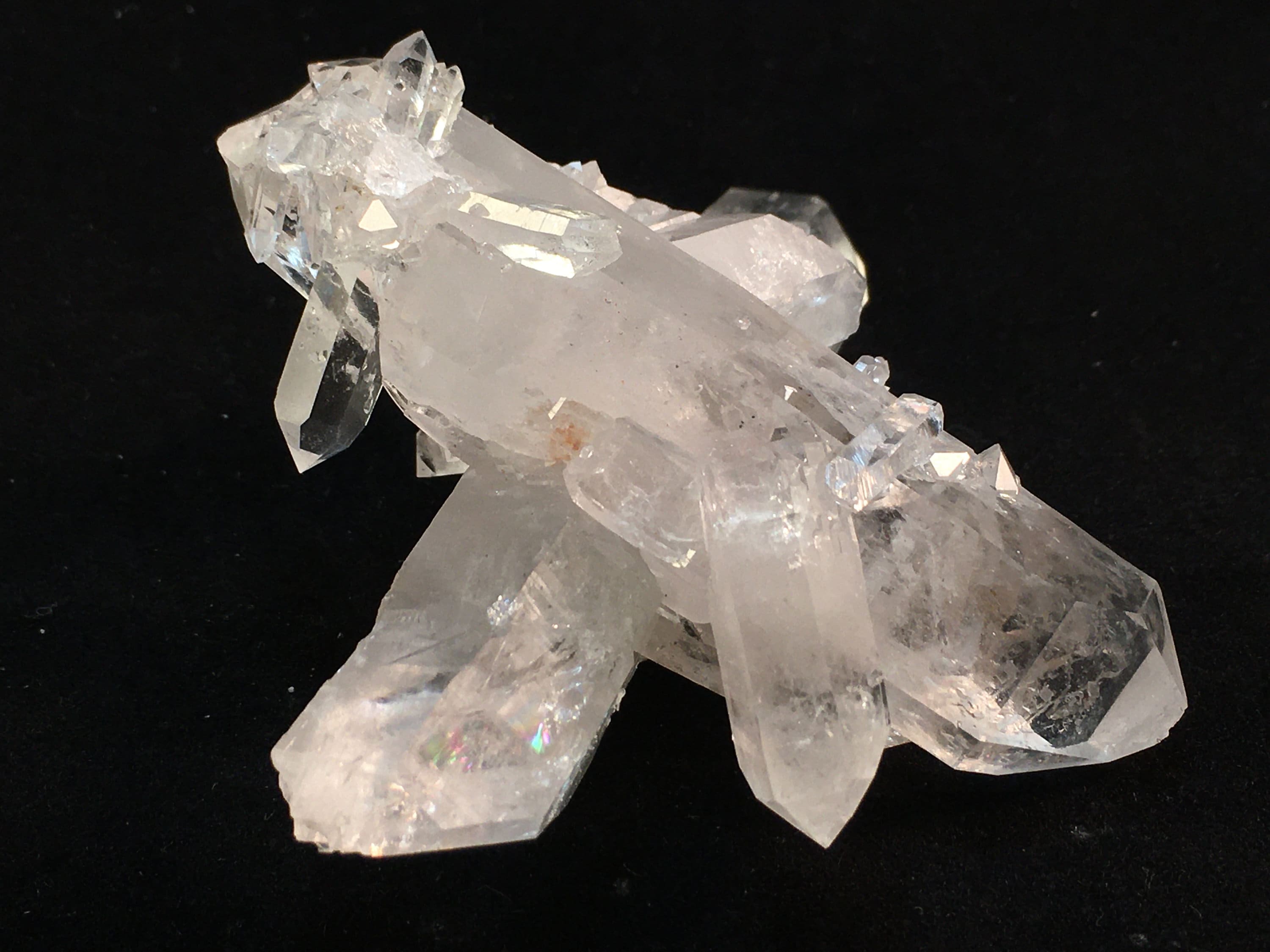 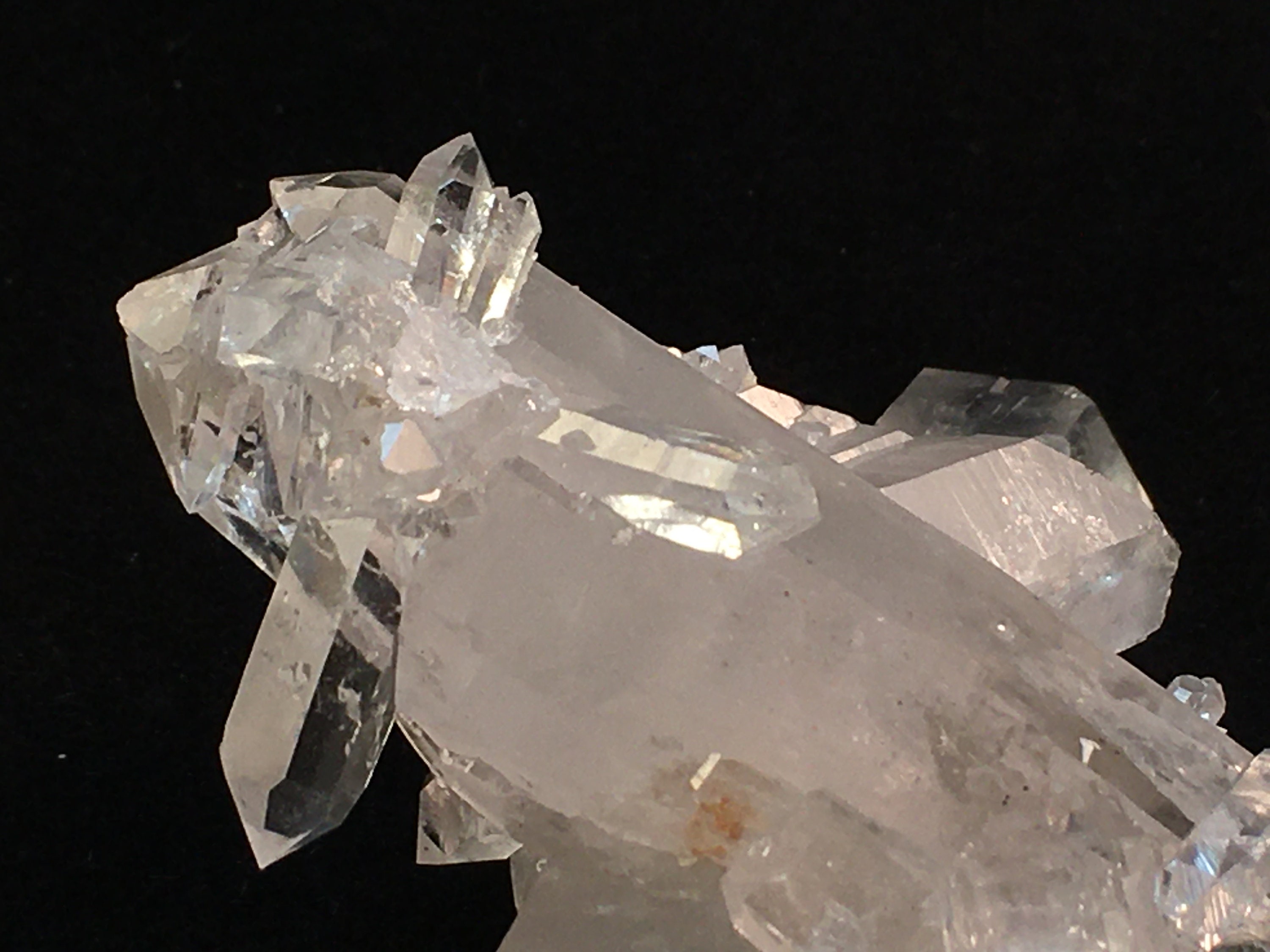 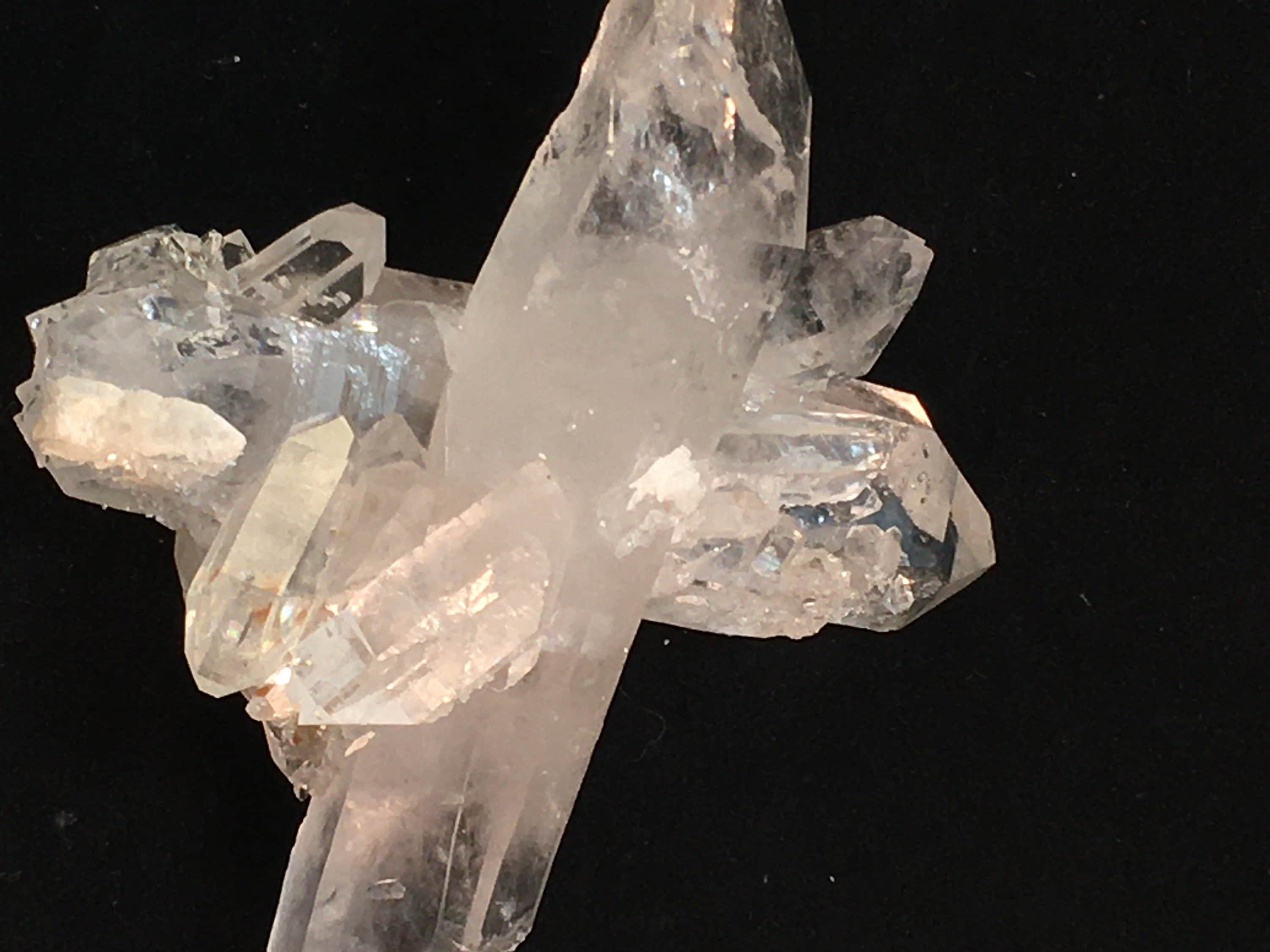 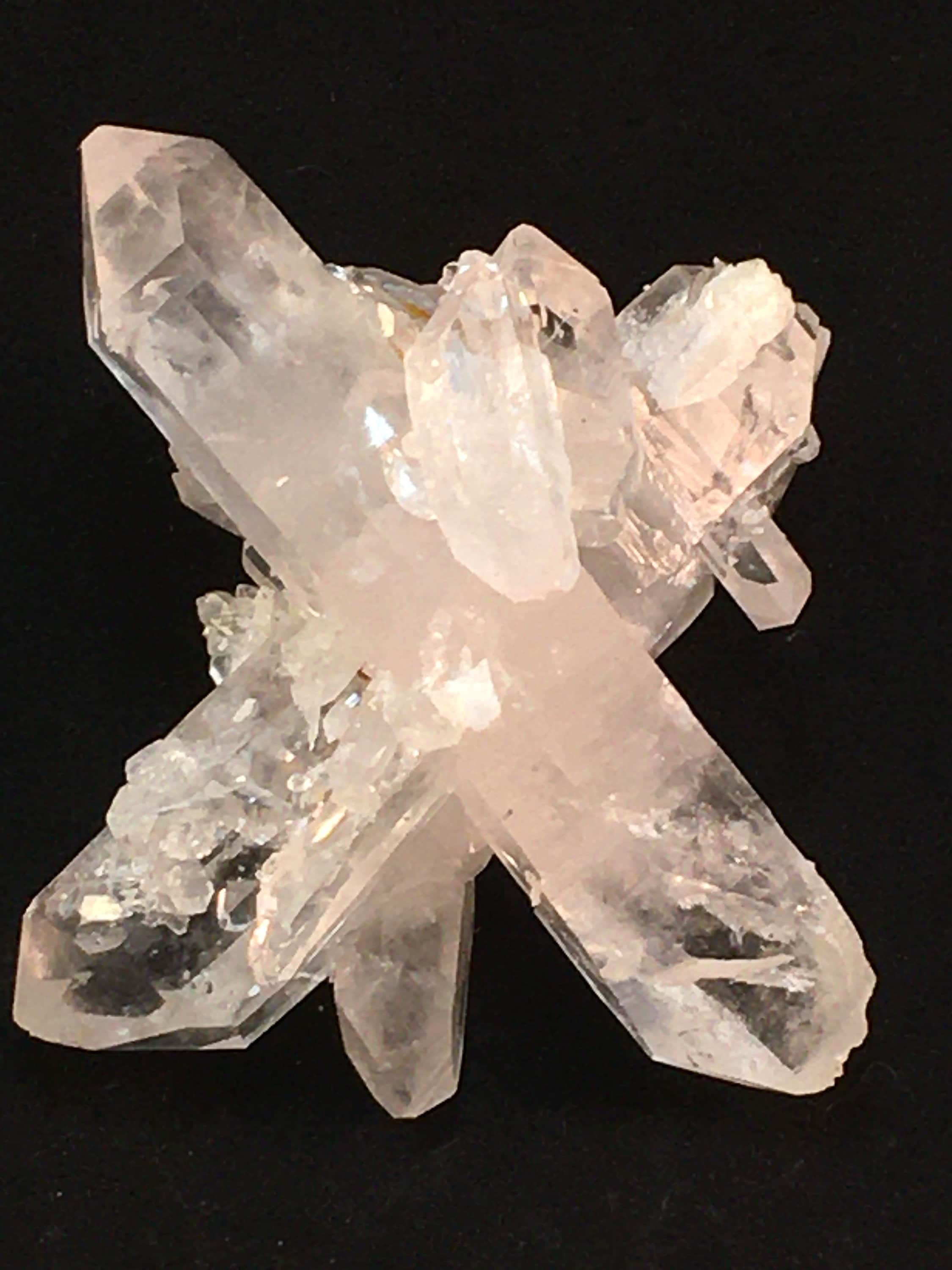 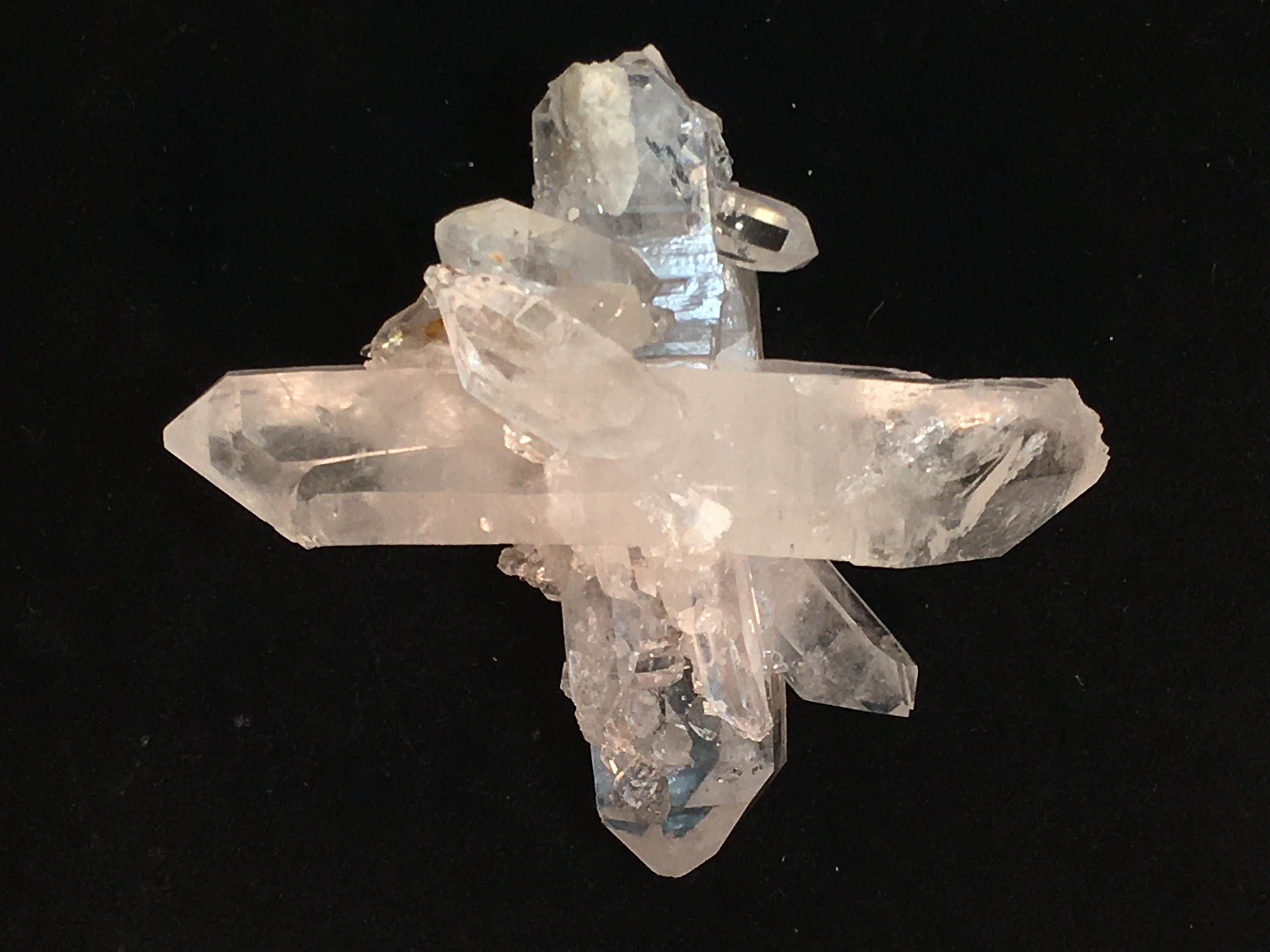 This Crystal was hand dug from the Arkansas hills. This is a SUPER rare formation. It is a Balanced Cross Formation, composed of 2 Double Terminate Arms, with loads of babies. There are 2 main arms to the cross, both of which are Double Terminated. The arms are also equal length, which forms a superior energetic balance. The cluster is also covered with loads of baby Double Terminates, and ANOTHER baby double terminate cross is embedded in one of the main points.

This is a Seed Crystal, which means that it formed on its own, surrounded by clay, rather than as part of a matrix on base rock. Much more rare, like a fraction of 1% of all quartz found. There are loads of rainbows throughout, points are super clear, and great sparkle! The only flaw to this formation is a not very noticeable small chip in one of the main points. Double Terminate crystals are used as great amplifiers of etheric energy. For a physical example of that, put a tuning fork to one end of a double terminate, and the other end of the crystal will have an amplified vibration!
Cross formations are often used for astral travel, remote viewing, and channeling, as they are said to better access other energy dimensions.

All in all, this crystal is the most unusual and unique formation in our entire collection! Its not the largest, or most jaw dropping at 1st glance, but I assure you, it will be next to impossible to find something similar out there! And it has so many unique factors to it....quite an amazing piece, and I've never seen anything like it in any gem store I've ever visited. I hope it finds its way to a real collector, or energy worker looking for something really special.


Quartz has traditionally been used for the transformation, amplification, and focus of etheric energies. Quartz crystals also have piezoelectric properties; they develop an electric potential upon the application of mechanical stress or pressure. Quartz crystals are commonly used as Crystal Oscillators in watches, computers, cellphones and other electronics. Quartz is used in Biodynamic and Organic farming to increase paramagnetism of soil, enhancing silica uptake and plant health. These stones make excellent meditation aids, are beautiful and fascinating to look at, and can enhance the atmosphere of any space.

But please contact me if you have any problems with your order.

0 items in your cart